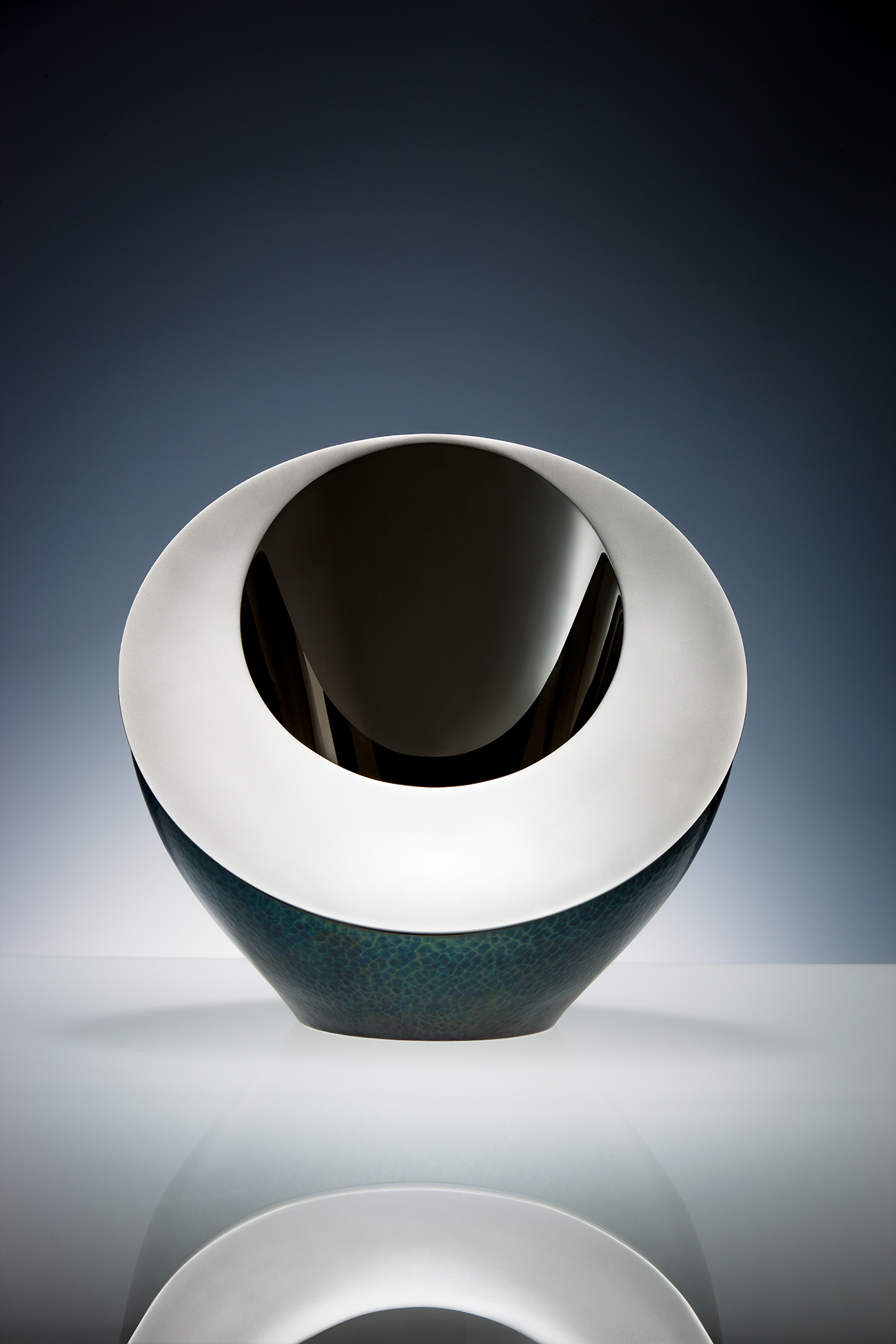 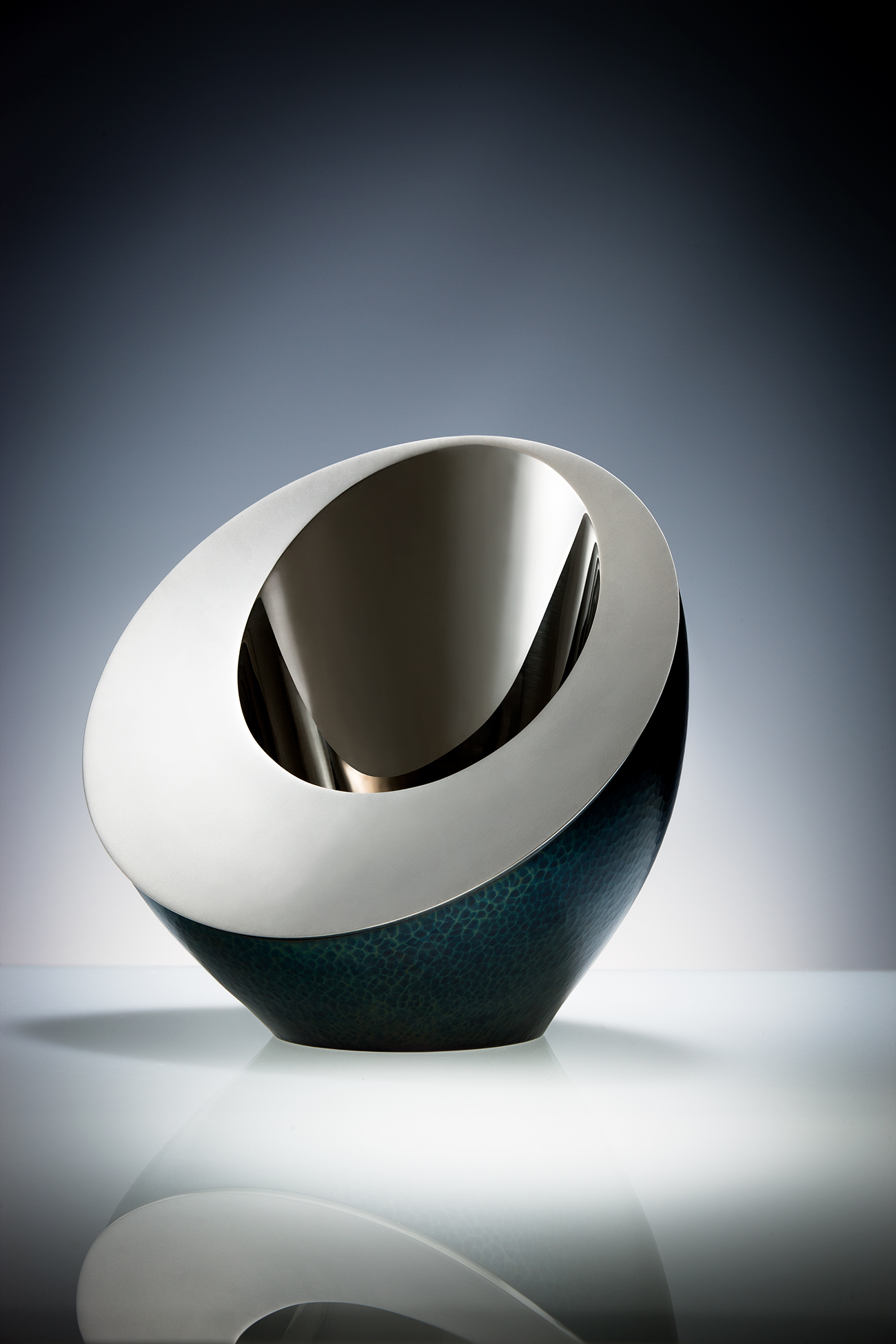 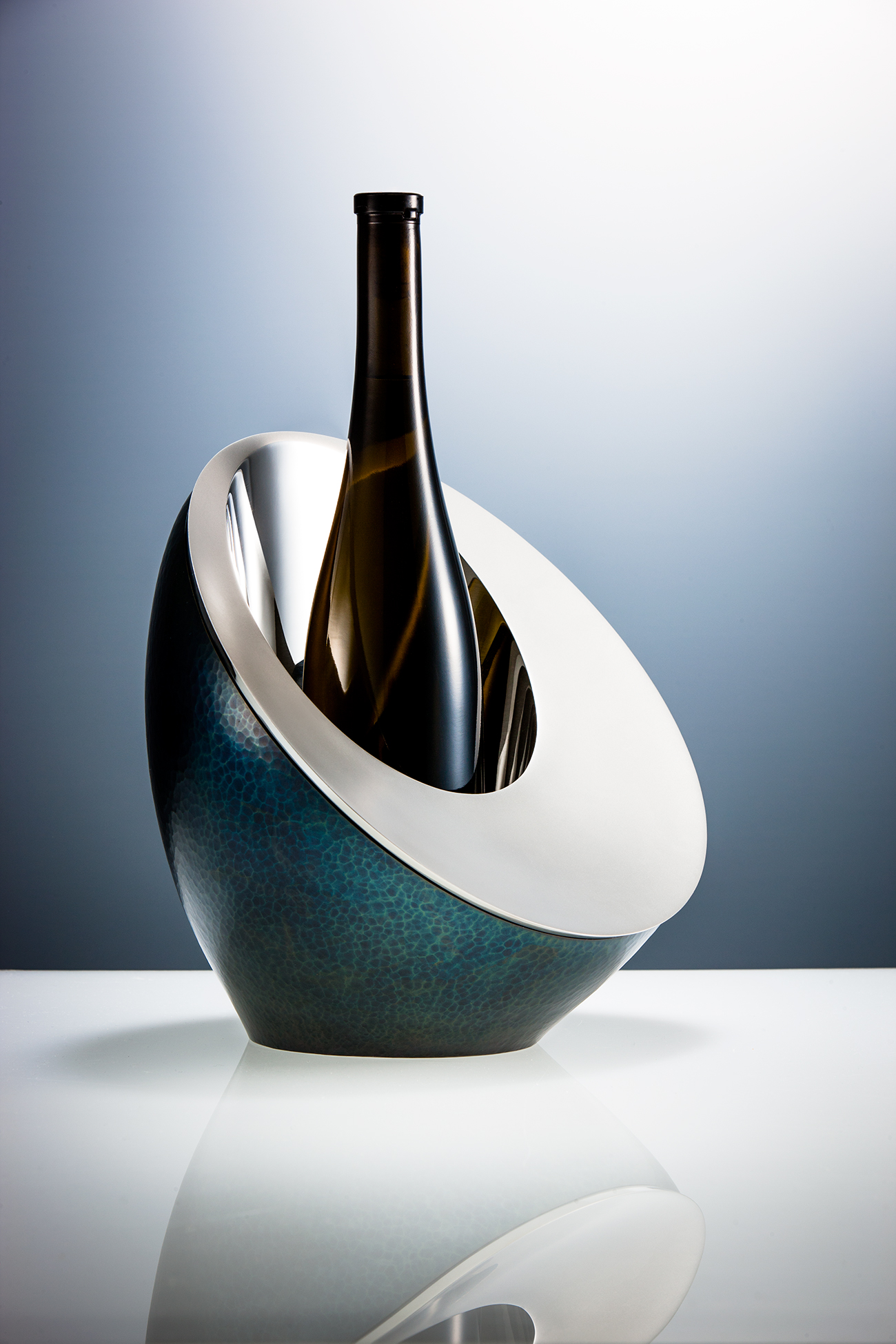 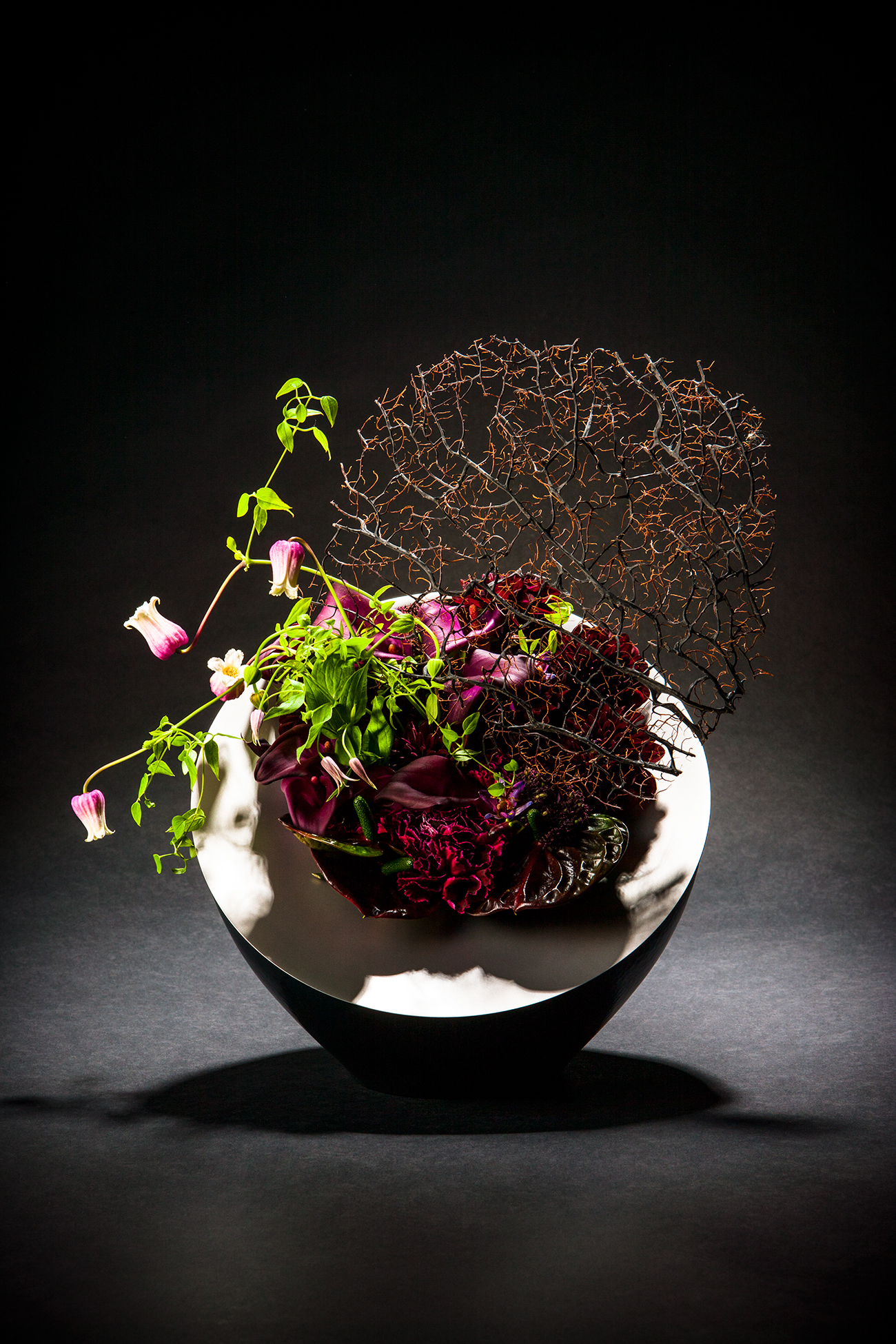 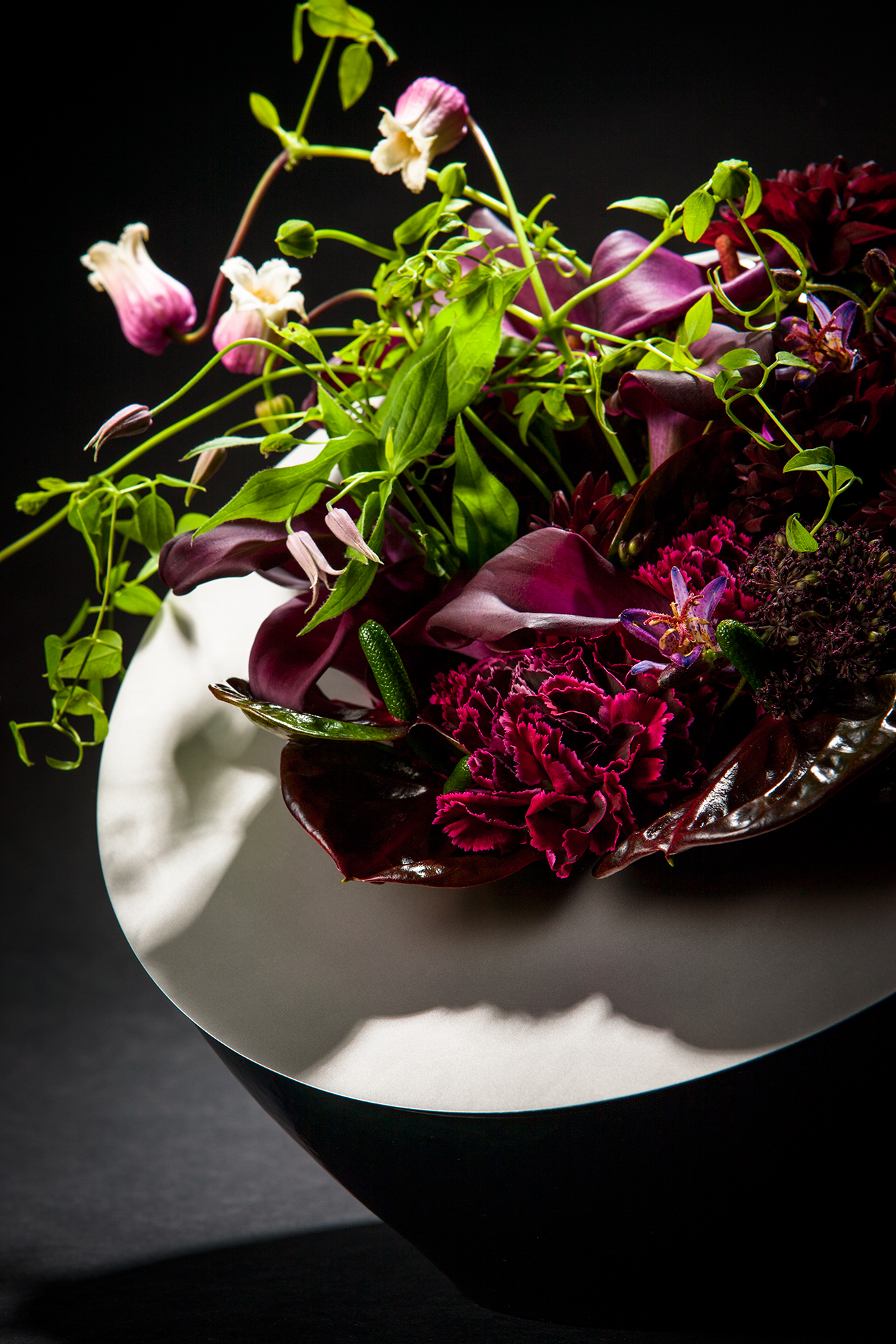 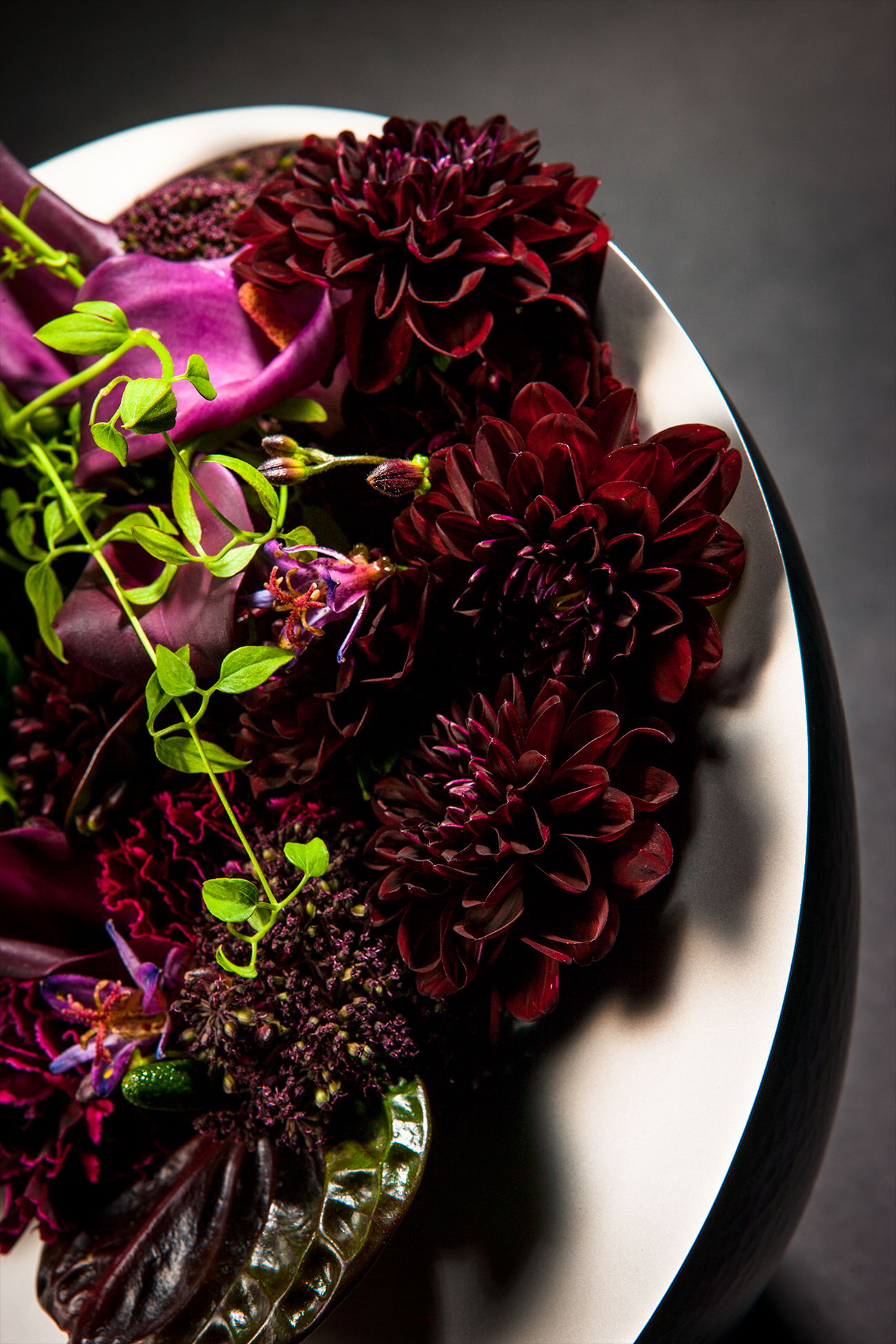 Since the dawn of time, the waxing and waning of the moon has stirred the imaginations of people around the world and inspired countless stories. Now, that motif comes alive again. For two centuries, Gyokusendo has cultivated the tsuiki technique of making hand-hammered copperware. By blending tsuiki with the proud imono (cast-metal) traditions of the Tsubame-Sanjo region, they have created MOON. A high-level embodiment of both utility and craftsmanship, this modern art piece can serve as a vase, a champagne cooler, or even as part of your decor. Masters of tsuiki and imono have joined forces and pushed each other to the limits to give rise to tsuiki-waki: an entirely new universe of handicrafts. 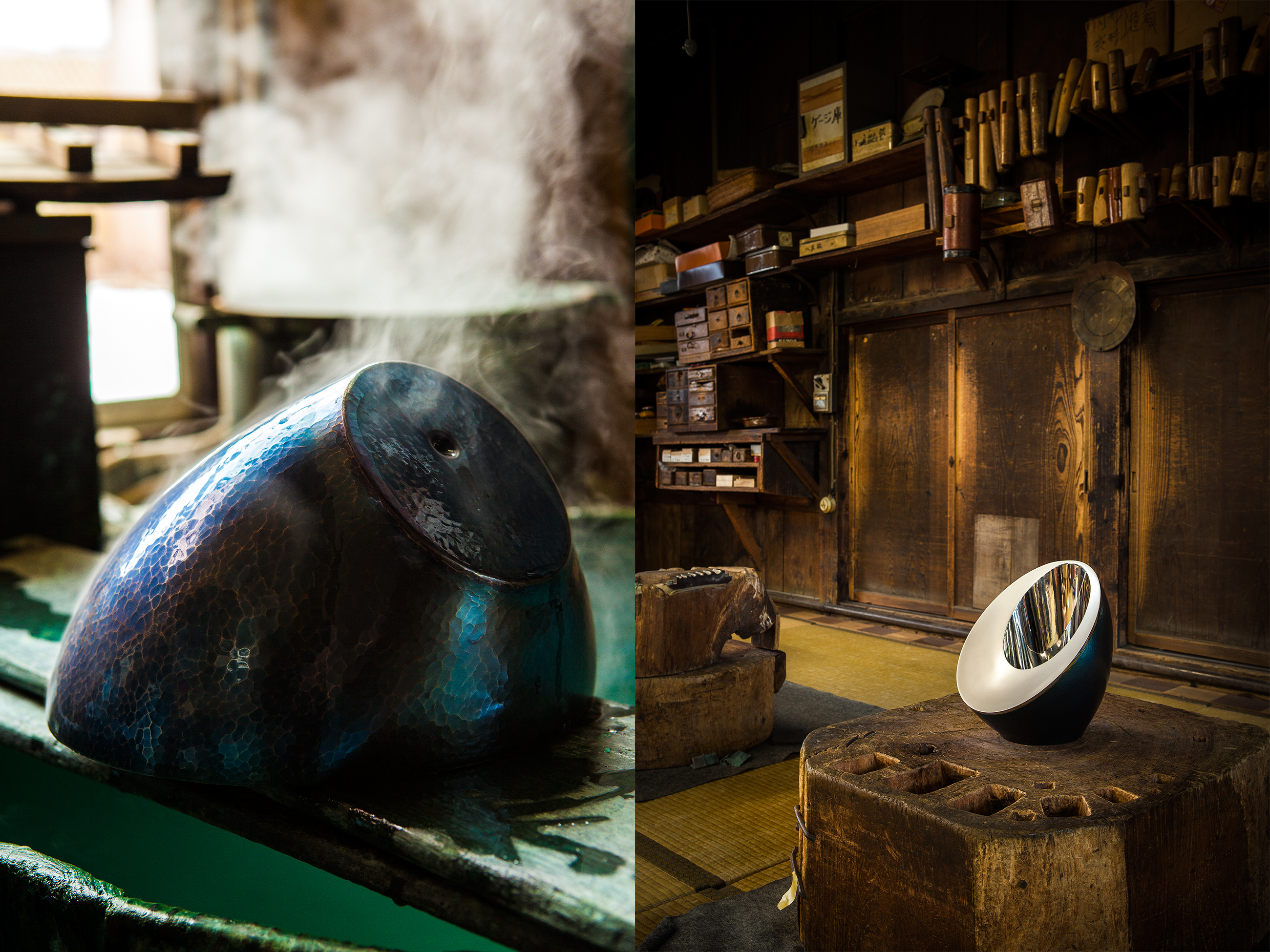 Q：First, tell us how MOON came to be.

Tamagawa: The tsuiki-waki project began with the decision to wed Gyokusendo’s traditional handicraft with techniques from other fields.

Tanigawa: It really did start out as the simplest of things. The idea of combining tsuiki (hand-hammered copperware) with waki (a broader term for Japanese ware of any material) was something that clicked for both of us.

Tamagawa: Gyokusendo specializes in copper, so it doesn’t normally occur to us to cross over and make things with other materials. In that regard, the project owes itself to Mr. Tanigawa challenging us to step outside our comfort zone. It was that union—us meeting him and having the fresh experience of working with different materials—that gave rise to MOON.

Tanigawa: The first time I was exposed to tsuiki copperware and saw how the metal could shrink beneath the hammer as it took shape, I felt a keen fascination—not just with the process, but also with the skills and character of the artisans themselves. Wouldn’t it be interesting if I had them apply their skills to something they don’t normally make? And that inspired me to develop a modern project that keeps the best of tsuiki’s distinguished history alive.

Tamagawa: Naturally, it presented new challenges for us. But the word “tradition” actually signifies the culmination of a series of innovations. True, you can simply hand down the same techniques and call that a tradition, too, but it’s not the kind of tradition Gyokusendo strives for in its work. In that sense, making this product with Mr. Tanigawa could be called a natural step forward for us. 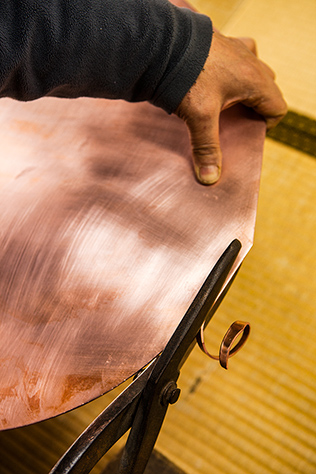 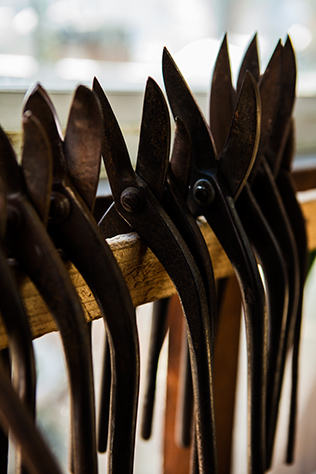 Q：Can you tell us why you decided to blend different materials, and how that process worked?

Tanigawa: The idea sprung from a wine glass Gyokusendo makes. It has a copper stem, but the body affixed to it is made of glass. When they first showed me the prototype, I was a little surprised; it made me realize they did have experience integrating other materials. When you try to innovate with a single material, you’re limited to modifying its color and shape, but by electing to use other materials, your creation’s world broadens.

Tamagawa: Actually, we originally conceived that wine glass entirely in copper, but abandoned the idea because you couldn’t see the wine you poured, and it was affecting the flavor! The thing about MOON, though, is that all work on it is completed in Tsubame-Sanjo: the imono (cast metal) as well as the tsuiki. Even the imono’s mirror finish employs an advanced technique known only to artisans who specialize in polishing. It’s so unique that a metal expert could look at it and say, “Oh, this is definitely made in Tsubame-Sanjo.” The area excels at completing all of its work locally.

Tanigawa: The concept I had in mind right from the start was to leverage Tsubame-Sanjo’s strengths and create something that was practical, but could also serve as an art piece. As I began thinking about a design that would accentuate overseas lifestyles instead of getting lost in the mix, I realized I couldn’t just make something “Japanese.” What struck me as most crucial was to model around more universal themes and let Gyokusendo’s traditional craft give them shape. That was how we would create a story that would resonate with the most people. 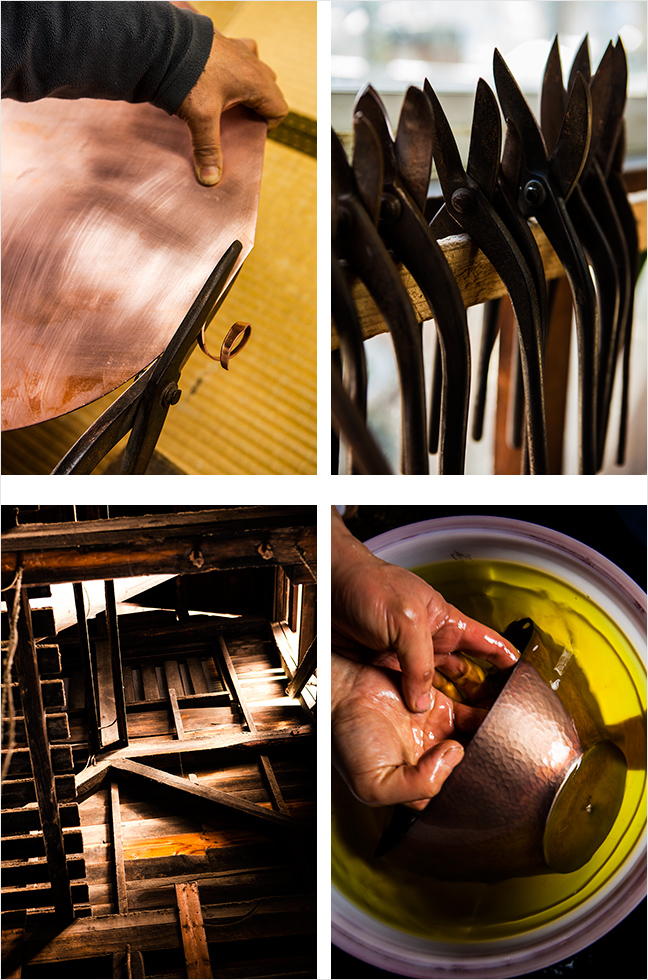 Q：So the motif for this piece is, of course, the moon.
Tanigawa: To be honest, when I started on the design, I had a really hard time settling on a theme. But as I gave it more thought, nature began to suggest itself as the right motif, and the concept solidified. People around the world had to understand and accept the design, so nature was a better fit than something distinctly Japanese. Additionally, if we needed something people of all nationalities could “see” the same way, I concluded the moon was the way to go. I actually considered a mountain as well, but when it comes to mountains, I’m sure people in Tibet picture Mt. Everest and people in Europe picture the Alps. A mountain takes on a completely different shape depending on who’s envisioning it. The same goes for a river; rivers like the Seine and the Danube conjure as many different images as there are imaginers. So, for a motif that was universal in both perception and design, I ended up settling on the moon.

Q: What do you think is so appealing about copperware?

Tamagawa: One characteristic of copper is that the “life” in it grows with use. We use natural liquids like potassium sulfide to give our copperware its patina; after using it, all you have to do is wipe it with a dry cloth to bring that texture out further over time. Naturally, we are creators, and with tsuiki, the creation continues after the product is complete. The customers who purchase our work cherish it for many years; they succeed us as creators and continue to give it more life. The things we make are certainly not essentials, but they do enrich the lives of their owners and bring them happiness. However, one thing I can say about this project in particular is that it took around two years to become a reality. As I touched upon before, Gyokusendo’s tradition has always been built upon innovation, but getting two techniques as disparate as tsuiki and imono to mesh proved to be a difficult task. Tsuiki requires hammering to shrink the metal and refine the shape, but no matter how many adjustments we made, we couldn’t get it to line it up with the cast-metal imono. Some part of it was always warped. Every single piece required its own process of trial and error to bring to perfection.

Tanigawa: In that sense, no two MOONs in our limited run of 100 are exactly the same. Each has its own personality. 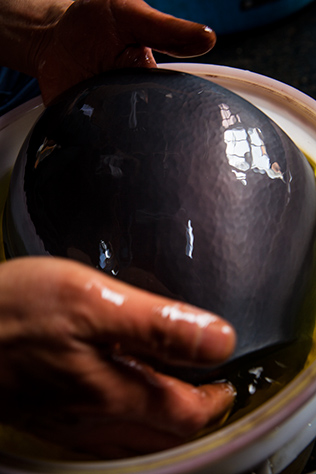 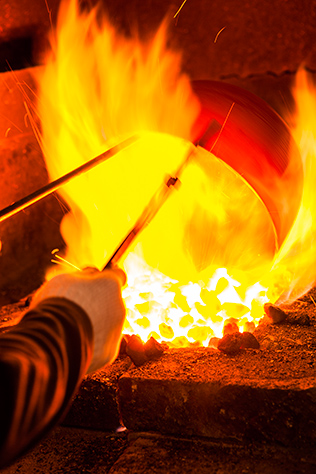 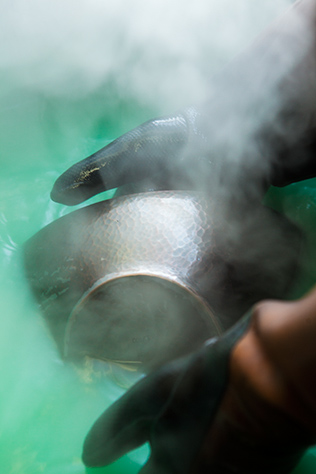 Q：What was your primary goal with this project?

Tanigawa: The most important thing for me wasn’t making the product. Actually, my biggest hope was to introduce people to Gyokusendo—not just in Japan, but overseas as well. I want the world to know about the things the company normally makes, because I firmly believe there are lots of people out there who would be fond of handicrafts produced the Gyokusendo way. The fact is, though, the world is a big place and it’s very hard to get noticed. For example, the role of a Japanese kyusu teapot could easily be fulfilled by another item elsewhere. If somebody makes a conscious decision to choose a Gyokusendo product over all the other options, they are acting on the certainty that this product is aesthetically superior. So I thought, the Gyokusendo philosophy needs to be conveyed with an equal amount of certainty.

Tamagawa: That was our real goal: reaching out to new markets by integrating the tsuiki technique into a novel product. I think it was because the two of us were mutually intrigued by that idea that the project was able to become a reality.

Tanigawa: MOON is being produced in a limited run of 100. Once they are sold, we will never make another. However, we do plan to produce a second piece in the tsuiki-waki series in its own run of 100. I would be delighted to see the series attract more fans as it continues on in new forms. 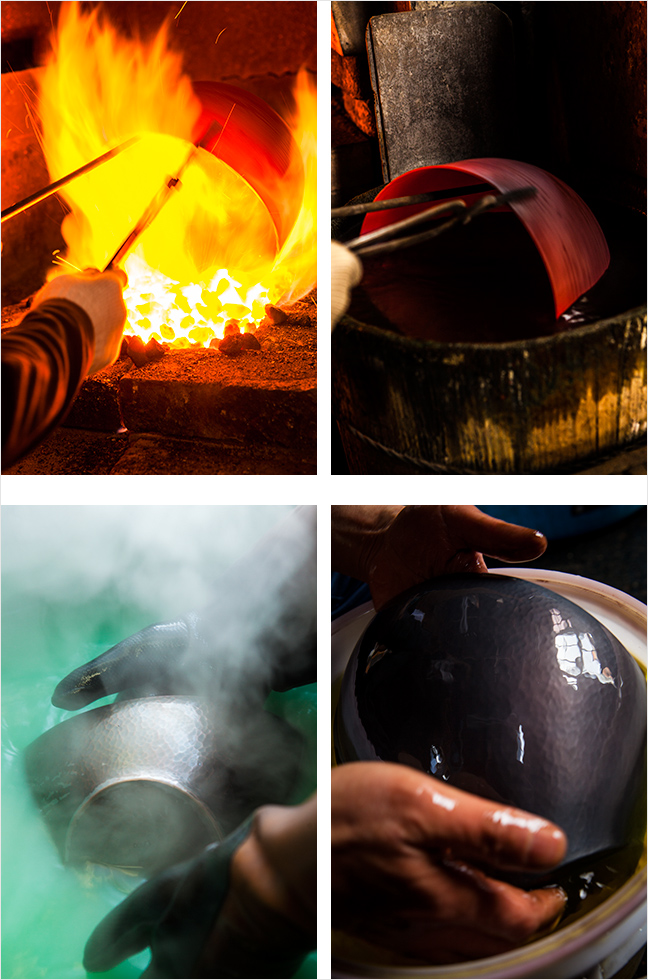 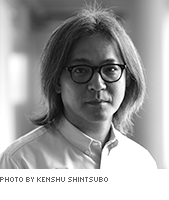 Tanigawa was born in 1965. In 2002, he founded consulting firm JTQ Inc., which provides creative direction to clients who want to “deliver [their] messages through the medium of space.” Tanigawa does not simply design physical structures; he applies all forms of communication to brand development and promotion. 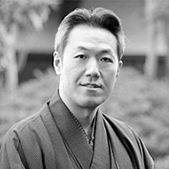 Tamagawa was born in the city of Tsubame, Niigata Prefecture, in 1970. He joined Gyokusendo in 1995 and was appointed managing director and seventh-generation head of the company in 2003. Since then, he has appeared yearly at exhibitions around the world, including in Frankfurt and Paris, actively working to find new markets and reach a global audience. Gyokusendo’s products can now be found in major cities around the world. 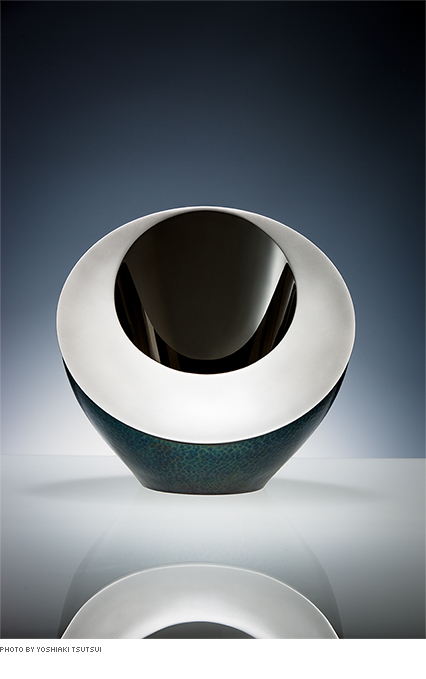